A marathon in a city like Berlin cannot be anything but “legendary” – Yes, that’s the theme of the event and the organisers did some brilliant promotions to reinforce. Check this promotional video,

The event holds a special place among runners for being the ‘fastest course.’ Suresh Seshadri, a participant in this year’s edition, wrote an excellent piece for the The Hindu ahead of last year’s event.

“the combination of a flat, fast course, a pack of top-flight pacers and ideal autumn weather has ensured that the event is now regarded as the undisputed WR marathon race. Its claim to fame cemented by the fact that the last six successive world records for the distance, for men, have been set on the course”

Last year, Eluid Kipchoge set the fastest time ever by clocking 2:01:39 and certainly, the expectations were higher this year. I must have watched his finish a zillion times over the past one year and through him, I tried to visualise my own finish!

Kipchoge had to pull out of the event this year due to his committments with the potentially record-breaking attempt to run a marathon under 2 hours (which he did so). His absence this year was filled by the presence of Kenenisa Bekele, the world record holder for 5,000m and 10,000m events. He justified his presence by clocking an impressive 2:01:41, the second fastest timing and he was followed by Birhanu Legese who clocked 2:02:48, the fourth fastest timing of all times.

Check out the list of the 10 fastest maratons on “Record-eligible” courses as reported by Runner’s World on October 20, 2019,

My entry to Berlin marathon was through lottery and I was over the moon when I found that I have managed to secure entry to the event, as I have failed in every other lottery to the world marathon majors. Having secured entry to the event, it was up to me to make it special. The preparations for the event started much earlier. My first priority was to do ‘something different’ to my routine and ventured to add Yoga to my routine since January. Ably guided by Prashanth, Yoga helped me to improve my breathing. The training routine was disrupted in June due to freak cycling accident and did not have the mental grit to bounce back quickly. I started my long runs in August and after finishing Hyderabad Marathon (for the 8th time) in 4:31:26, I decided that my realistic target for the event would be 4:15.

I reached Dresden, Germany a week before the marathon and my good friend Padmanava was there at the station to receive me. I hired a bike the following day at Dresden and set out to ride towards Prague. I reached Sezemice, near Teplice on Monday, stayed overnight in a quiet hotel, and rode from there to Prague on Tuesday. After going around in Prague on Wednesday, I returned back to Dresden by train. The route was scenic with some challenging climbs and the highlight was crossing the border into Czech Republic with no checks. 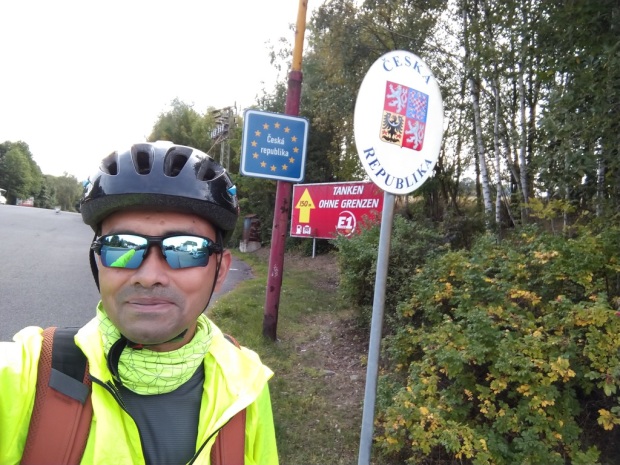 After staying another day at Dresden to enjoy the exemplary hospitality and tour of Dresden by Paddy, I proceeded to Berlin on the Friday, September 27. The city was warming up for the marathon weekend. The pre-marathon event expo was held at the now-defunct Tempelhof airport, one of the oldest airports in the world. The vast airport suddenly looked small when filled with runners waiting to collect their race numbers. The added attraction in shopping, largely related to running, from fancy clothing to accessories and nutritional products, represented a running festival.

On Saturday, there was a ‘Breakfast Run’ organised from the Charlottenburg Palace to the Olympic Stadium — two iconic monuments with plenty of history. Running into the Olympic stadium, stories of 1936 Olympics and memories of the 2006 World Cup final flashed in my mind. It was in this stadium that Jesse Owens won the gold medal for the long jump in the 1936 Olympics beating Luz Long — a story that is a great example of sportsmanship. It was also the same stadium where the legend Zinedine Zidane bowed out in an unceremonious manner. So, when I met someone by name ‘Marco’ from Italy, I couldn’t resist enacting the sequence from 2006 World Cup!

It was also fun to bump into Chennai Runner, Vilva on the run, whom I was meeting after ages.

Getting 44,000 runners to run through the streets was no easy task. Runners were grouped in four categories and the start times ranged from 9:10 am for the elites to 10:10 am for the back-of-the-pack, where I duly took my place. Before the race, I decided not to wear my watch to track timing/distance. I started using tracking device from December 2016 and it has helped me in focusing my training runs well. This was a race where I had mentally prepared to give my best and I certainly don’t need a watch to tell me that I am running at my best. I had prepared for this event for the preceding 9 months, and decided that it would be best for me to run my heart out. From the gun shot, I made sure that I ran every minute of the race. 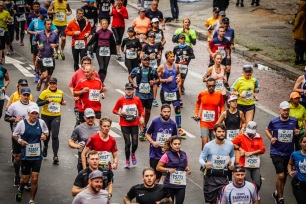 After running about 10 Km, largely jostling for space, it started raining and there was some challenge in an otherwise “fast marathon”. It must be noted that by then, Bekele and other lead runners had finished their respective races. The rain was certainly not a deterrent for runners as most were busy living their long cherished dreams.

What was surprising though, was the unflinching support from the volunteers who didn’t move from their positions, until the last one went past them. The equally admirable crowd didn’t relent either and cheerfully supported the runners through the route. Lively music bands were stationed across the route playing vibrant music.

Timing mats were placed at every 5K point and at the half-marathon. I could vaguely guess my timing for the intermediate split based on the time displayed. For instance, I knew that I completed my half-marathon at around 2 hours and was slowing down after that. The rains weren’t giving up and neither did my spirit. I continued pushing towards my best to see how far I can stretch myself. Naturally exhausted after the 30th KM, I was looking for some external motivation to see through the remaining distance. Before the event, Ashok, from Pillar Pacers informed me that he would be waiting at the 39th KM point. His presence at the 39th KM provided me with huge respite, when I saw him waiting in the rain and cheering for me. He also clicked a picture, which was certainly priceless!

The marathon route goes through some of the landmarks of Berlin including the Victory Column, German Chancellery, The Friedrichstadt-Palast, prominent art galleries and museums, Bundestrat, and finally, the Brandenburg Gate appearing between 41 and 42 Km points. Running through the Gate (Built in the 18th century to commemorate peace, it was closed for 28 years following the division of Germany), was something that I have been dreaming about ever since I won the lottery to participate, and the last kilometre was certainly my fastest!

Did I mention that the current marathon route passes through the landmarks of the erstwhile East and West Berlin signifying a unified spirit. In the first Marathon after the Wall came down, it was Uta Pippig, from East Germany, who won the race in the women’s category. Listen to her recollecting those wonderful moments,

A euphoric finish was rewarded by a wonderfully designed medal — one side featuring the important landmarks of Berlin and the other side the a relatively unknown Lutz Derkow. Lutz Derkow was one of the earliest employees of the organisation and worked for the event for over 30 years before passing away earlier this year. It was a tribute to him.

That evening, as I departed from Berlin, there were the finishers in the airport proudly sporting their finisher tees and medals all the way to their flights — the Berlin legends! I knew my finish timing only when I got my medal engraved. More than calling it a ‘Personal Best’ for being the fastest time that I have clocked for that distance, I would call it a ‘Personal Best’ purely for my efforts. Although, my 32nd marathon, this was one event that I would consider best in terms of planning and execution. The hype around the event was certainly worth every bit of it and I am proud to say “Ich bin ein Berliner“

Do check out the highlights of the event in this official video,

An edited version of this blog was published in The Hindu – Metroplus on October 11, 2019 – https://www.thehindu.com/life-and-style/fitness/a-first-person-account-of-running-in-the-berlin-marathon/article29639975.ece