I wasn’t sure if it was the weather or the terrain or the place or, to be honest my weariness. The decision was made and my trip was to end in Goa; But I wasn’t sure where in Goa it would be – Panaji, Margao or Vasco. The previous three days of long rides left me with very little motivation to ride the following day. The room rent was cheap and food was affordable. I also bought myself a map of Goa trying to figure out the route for the next few days.

The rest turned out to be a good decision though. During the day, I took a stroll in the streets of Karwar. A picturesque small town with beach on one side and the western ghats on the other. The landscape of the town resembled my vision of RK Narayan’s Malgudi. The market area, those little restaurants, sparse vehicle traffic and of course, those simple folks walking down the road brings the picture out of any RKN’s novels.

The evening was spent at the Karwar beach romancing the sunset, albeit with a difference! I took my Bike along with me to the beach and cycled along the waves – felt like the tour has attained it’s salvation. One of the advertisement campaign by Karnataka tourism states that it was at Karwar where Rabindranath Tagore got inspired to write his first play. Following that, I am tempted to claoim that I was inspired to write this travelogue at Karwar – Not sure the content justifies such high claims. 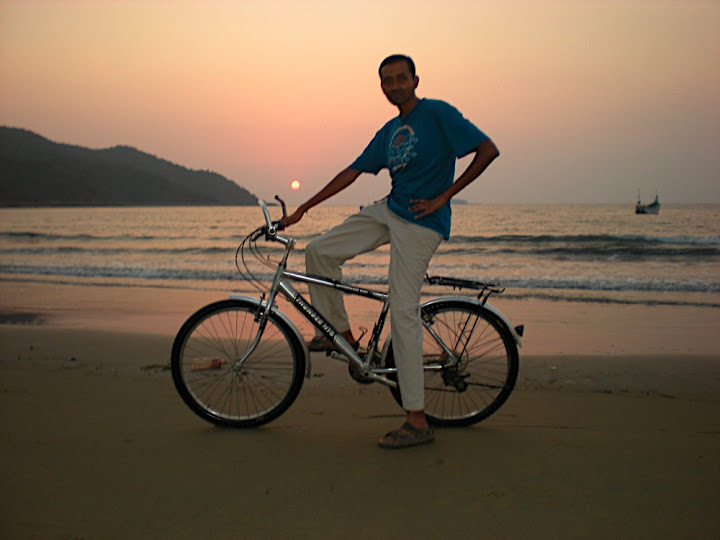