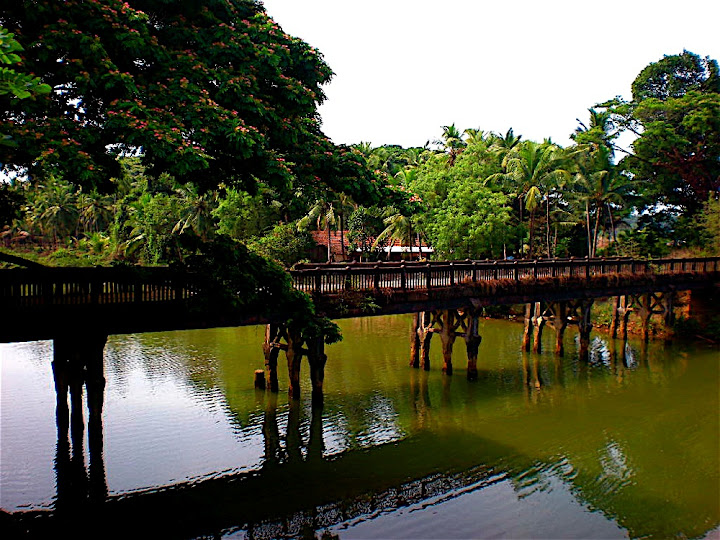 The rest brought a new lease of life for my legs. Mangalore to Kundapur was roughly about 100 kilometres and it did take some effort. The ride plan was slightly different from previous days. I had decided to take a break at Udupi to visit the Sri Krishna Temple to complete the ‘trio’ of Sri Krishna temples along the coast. Mangalore to Udipi was roughly about 64 Kms and the road was flat one making it very easy to navigate. The first stretch through the Mangalore Port was pretty much a hell. It resembled running near the entrance of port in Chennai. Highly polluted by the shipments of iron ore that is being exported from there, the lorry traffic and bad roads made things really worse. The bridge at the end of the port area resembled the iron bridge and here, I could take breather after navigating the Port area. 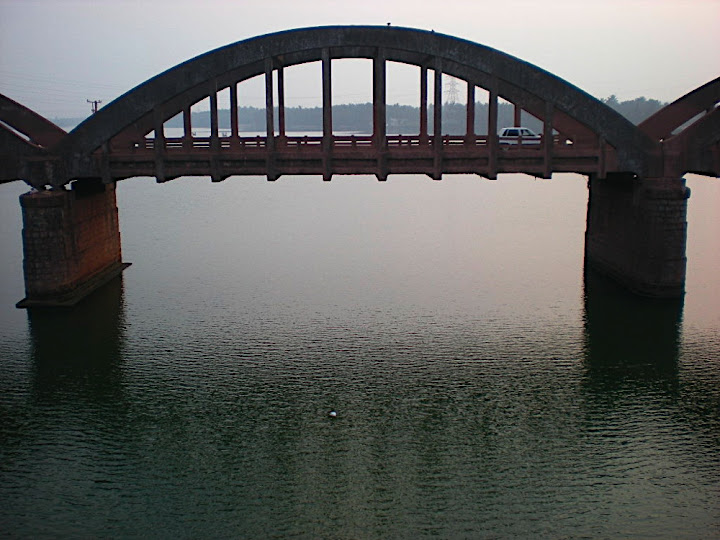 The highway from there to Udipi was reasonably good though with less natural beauty. My next attraction was an old bridge besides the highway. The Bridge was aesthetically built but poorly maintained. The picture can be seen at the top of the page.

The highway then leads to Surathkal, home of one of the National Institutes of Technology. I reached Mulky for my breakfast at Hotel Swagath. During the breakfast, I picked up conversation with a person who was driving down to Mangalore. He asked me a strange question – Do I require any permission from police to do this ride? I replied him that I am unaware of anything like that, and if I need any, I aouldn’t take it either. Most ‘security concerns’ in recent years seems to be originate from the cities where insecurity is constantly on rise. There wasn’t a single instance of a security check anywhere on the 1000-odd kilometer stretch that I covered during the trip. I did have a few conversations with policemen on the way, and I was once invited for a tea by the policemen in the Karnataka-Goa border. While settling the bill, the restaurant manager enquired about my hometown. On hearing that I hail from Chennai, he started conversing to me in Tamil. He apparently hails from Madurai and has settled in Mulky for the last 17 years. It was the first time that I ever heard of a place by that name and was interesting to see a person from Madurai settling there years ago.

I reached Udipi by 11:00 AM and found a place to stay in one of the choultary – undoubtedly a source of cheap and clean accommodation. After finishing bath, I reached the temple to have a ‘glance’ at Lord Sri Krishna. The temple also has a ‘Bhojanashala’ serving free food for all devotees. I wanted to try the food but the frenetic pace at which the food was served kept me away from it. I just cannot eat so fast! In many of the Indian temple towns, these Choultries and Bhojanashalas were established to offer free food and stay for the travelers who come from distances to visit these temples. I wished that my next cycling trip involves staying in these modest choultaries and having food in these Bhojanashalas, combining a spirit of traditional ‘Yatra’ into cycling.

After a couple of hours of rest, I proceeded to Kundapur where I planned to stay that night. The ride was through the highway with less to report about.

The aspiration for a “spiritual” tour was realised in 2013 by running the Navagraha Ottam.