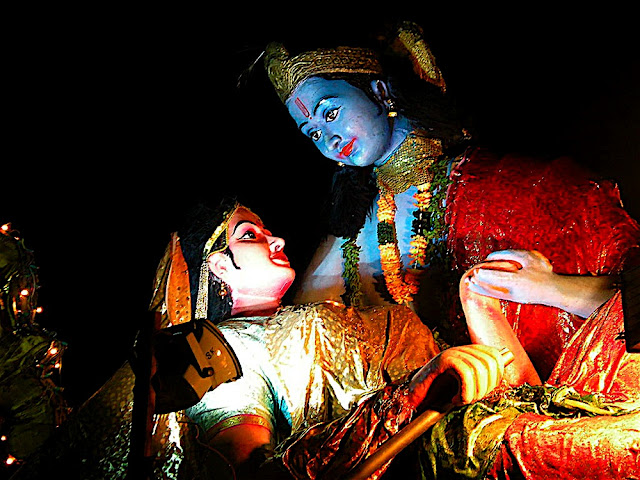 On the first look at the map, it looked like a dull day of riding with most of the distance to be covered on the highway. The first place of attraction was the busy fishing harbour outside the Kollam town limits. Though the smell of fishes deterred my stay for a long time, I was fascinated by the sight of the busy harbour, boats moving around, the sunrise on the eastern side, and the noises around.

The first diversion from the highway was few kilometeres away to visit an Ashram called ‘Panmana Ashram’. I looked at the Ashram from outside and could not make much out of it. I could not find anyone around to guide me and hit the highway again. The next diversion was more meaningful.
I saw the board for Amritapuri and decided to pay a visit there. Beliefs apart, one has to be honest in confessing that religious/spiritual places serve the best food at no cost or reasonable cost! Hence, even if I do not get any “spiritual benefits” out of visiting the place, I was confident of getting a good breakfast and I wasn’t disappointed about that. I reached the Ashram and chose to make some enquiries (not just about breakfast!!!) with two foreign tourists. They were very kind and suggested that I stay there and have ‘Amma’s Dharshan’ which was scheduled for the day. They even offered to arrange a Dhoti for me to attend the prayer session. I informed that I will decide about it over my breakfast. My cycling costume had plenty of onlookers giving ‘strange’ looks giving me an indication of the inappropriateness in such places. I was still confused whether I should stay or continue as a delay may affect my plan of hitting Kochi for the weekend. After the cheap and nutritious breakfast, I chose to move out of the Ashram quickly without causing further embarrassment to the authorities. The Ashram was located in a picturesque location on the banks of a backwater with the educational institutions on the other side. The chances of photography was limited because of the restrictions imposed there. After riding for few kilometeres, I hit the highway again to have my lunch at Kayamkulam. The afternoon was spent at a browsing centre announcing to my friends about my progress in the tour on social networking sites. The next big town on the route was Haripad where I stopped to have a cup of coffee at Indian Coffee House. The sky was getting overcast increasing the chances of a rain.

Meanwhile, standing on the sidelines,  I was entertained by few kids who helped me kill the time. They were curious to know my name, about my trip and importantly, my helmet! They wanted to wear it and see how they look with it. Despite the fact that neither of us understood each other language, a friendship was blossoming there.

After the rain stopped, I moved towards Ambalapuzha where I decided to stay for that night. It was an abrupt ending to the day’s ride as I had originally planned to finish the day at Alapuzha. I got a hotel close to the Sri Krishna Temple and the manager suggested that I visit the temple next morning. It happened to be the first of the ‘three’ Sri Krishna temples that I visited during the trip.

Ambalapuzha was certainly one of the find of the tour as I have never heard about the place before.  Southern Kerala is filled with so many places of importance that I certainly wish I do multiple trips to get a better insight about those places.