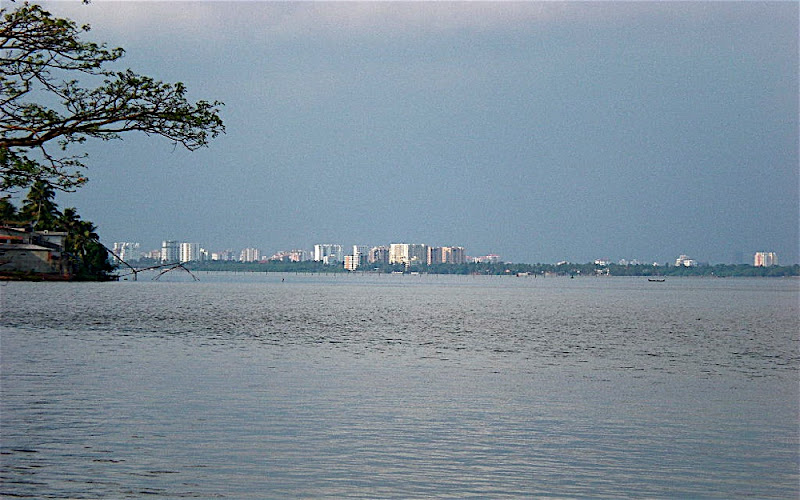 Day 5 started with a visit to the Sri Krishna Temple at Ambalapuzha. It was an opportunity offered on the plate and I couldn’t resist it. The temple was small, yet impressive with a very good sense of aesthetics. One could feel the early ‘morning freshness’ in the clean air and surroundings in the temple. I had long lost interest in visiting temples in Chennai, largely because of the crowd visiting the temples who just cannot switchoff their mobile phones and incessantly keep chatting. In many cases, I find that people do not even differentiate between visiting a temple and visiting a shopping mall. After sipping a cup of coffee listening to a melodious number of Yesudas in a restaurant outside the temple, I departed from Ambalapuzha.
The next destination was a Alapuzha or Alleppy. The town was renowned for it backwaters and often referred as the ‘Venice of the East’. I visited the beach which was deserted in the morning hours.

I could notice a dilapited port at the beach. It was the erstwhile Alapuzha port closed about 30 years back to facilitate the development of Cochin port. A few of the remains of the port could be still seen like the railway tracks and the jetty.

It was regrettable that I could not spend much time in Alapuzha going around the town in boats, given its claim to be the Venice of the east. I then continued to reach Chertala or ‘Shertallai’ – both names were used in different contexts.

Lunch time and the challenging task of finding a vegetarian restaurant was thrust upon me. I could not find any within the town. At about 5kms north of Chertala, I could find a vegetarian mess on the highway. It was a small one and went by the name ‘Lakshmi Mess.’ Initially deserted, it was soon crowded as they started serving the lunch. I would consider the lunch there as the best of the entire tour. Hand-beaten boiled rice with delicious ‘More Kozhambu’ was the pick of the lunch. Unlimited food tempted me to try the ‘More Kozhambu’ once more and the diminishing law of marginal utility seems to be false in this context! Here again, the melodious music of Yesudas and Jayachandran on the background, the lunch was indeed exotic. Price – Just Rs. 15 – putting restaurants everywhere to a shame.
After a good lunch, a rest was manadatory and this time it was in a slightly unusual place. It was on the campus of a fodder factory belonging to the Kerala Milk Co-operative society. The topics for discussion ranged from the delicious ‘Paladai Pradhamam’ to Milk economics of Kerala. I was curious to know about the meaning of their brand name ‘Milma’ but apparently, there wasn’t any. I also learnt that the Ambalapuzha temple is famous for its delicious ‘Pal Payasam’ for which bookings are accepted 6 months in advance. Kerala suffers a shortage of Milk production (May be they opt for beef which secures more money than milk!) and the shortage is met by Tamil Nadu and Karnataka. Still, I found coffee or tea to be cheaper in Kerala than most places in Tamil Nadu!
The afternoon ride towards Cochin was predominantly on the highway. The waterways at Edakochi gave me some opportunities for photography. Else, riding through the industrial zones and dodging the local buses in city roads aren’t great experiences to write about. The view of the backwaters at Edakochi was wonderful (pictured below).

Entering the city of Kochi, the pain of riding through city traffic was inevitable. I rode through some narrow bridges and dodged through the local buses – who seem to be the ‘Kings’ of the local roads. After passing through the Cochin Shipyard, I reached my hotel closer to the Ernakulam South railway station.