The train reached Kanniyakumari as scheduled, well after the sunrise. I had ideas of witnessing the sunrise before I embark on the ride but was unlucky not to have any train reaching before sunrise. I had to spend additional time in the station to claim my Bike from the luggage compartment. The time was spent doing some research on the spelling of the name of the town.

The station name board spelt ‘k-a-n-n-i-ya’ whereas my ticket spelt it as ‘k-a-n-y-a.’ After some bit of research, I found that the difference is because of the way the name was spelt in Tamil and Hindi. The station authorities used the Tamil transliteration whereas the IRCTC, who book the tickets, opted for the Hindi transliteration. I found more rationale in choosing the former than the latter. Yes, I did have lot of time! 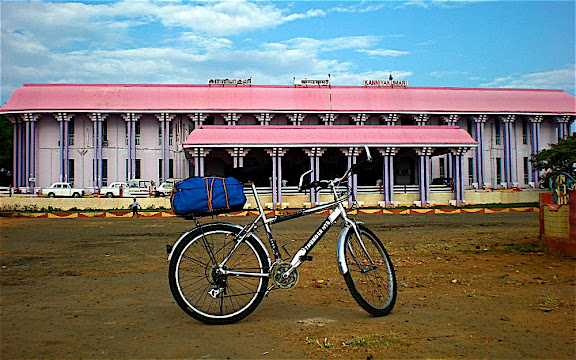 I wanted to start the journey from Vivekananda Rock Memorial for couple of reasons – it was the southernmost tip of the peninsula and importantly, Swami Vivekananda attained enlightenment there giving me a faint hope that I could get closer to it. Just an attempt to think big even if I may not end up doing big things. It took considerable time to take the boat towards the Rock. I was too tired by then to stand in another queue to enter the Memorial and did not go inside. Since, It was the Rock on which he got his enlightenment, I gave up my plans to visit the Memorial. I preferred to glance it from outside and move on to the next rock where a statue of the poet Thiruvalluvar is located. Later, I met a lady who works for the Vivekananda Kendra who chided gently for missing a ‘golden’ chance to visit the Memorial. She also shared an interesting fact that there is absolutely no piece of land from the Rock to the South pole!

I opted to avoid the highway from Kanniyakumari towards Trivandrum and chose to ride the West Coast road towards Colachel. The road had very little resemblance to its counterpart in the East coast, importantly less lorry and bus traffic. The road was not well laid and the and the gradients provided me with sufficient challenges. I headed to lunch at a place called Rajakkamangalam. The lunch involved some conversation with the locals – learning about the festival in their neigbouring village and that the hotel will be closed for the next few days. Some enquired about my trip and the reasons for the trip. One of them suggested that I could do it for ‘Sri Lankan’ Tamils and thus get some publicity and security protection, apparently not very different from what the politicians in Tamil Nadu were then doing! I choose to rest for a while post lunch and found a nice place under a neem tree.

The afternoon session started with a ride towards Colachel – the last town on the West coast of Tamil Nadu. Colachel is an old sea port with very less relevance today. It was famous for te Battle of Colachel. The place was occupied by the Dutch, centuries back and won back by an Indian King, Marthanda Verma before the British took over the entire country. Marthandam – the town where I finished my day’s journey – might have been named after the monarch!

The rains started pouring and I had to take a refuge under the shade of a shop. The time was well spent chatting with an Old man. He sounded like an Economist (who isn’t?) discussing topics  from communism to development economics. He was telling about the rich history of Colachel port and how wealthy the region used to be in the past. Work opportunities for people have since declined as the port has been closed long ago. He bemoaned the myopic view of politicians who started giving more importance to the development of the Cochin port, thus neglecting the growth of Colachel. (Later, I read that the Tamil Nadu Government had announced in 2007 that it will make Colachel a major port very soon. Not sure if the announcement is ever likely to be translated into any action) I could not follow some of his conversation due to the different accent and that the content was ‘too complex.’

I managed to reach Marthandam before dark and found a place to stay. I stayed in a hotel on the highway for the night.

Kanniyalumari – Ethamozhi – Rajakkamangalam – Colachel – Karungal – Kuzhithurai – Marthandam. The road was not well plotted in the maps available on the net. I have plotted it manually. The road from Kanniyakumari to Colachel is called the WCR.

For more images from Day 1, check out the album here

In a journey where the destination is not defined, it was quite natural to savour the journey. To look back and say that I travelled only about 60K that day feels trivial but that wasn’t the case back then. Over the last 10 years, I have not managed to vist the places and hence, cannot say much about how things have changed. Regarding the Colachel port, it looks like it is still at proposal stage.