After a day’s rest, I was all set for a long ride. The highway from Karwar goes alongside the beach and crosses the Kali river, where I caught a glimpse of a beautiful sunrise. On the western side of the bridge, one could see the river merging with the sea. To add to the scenic beauty, the northern side of the bridge leads to a narrow pass between two hills. It was indeed a romantic spot to watch the sunrise as well as sunset. The state of Karnataka ends a few kilometers after this point and it was time to proclaim that I have completed cycling the coast of two states in India – and yet many more to go! While I could see a couple of boards bidding farewell to the visitors of Karnataka, I couldn’t see any board inviting people to Goa.

The first village was called Mashen, where I stopped for some breakfast. It was a Goan-style of Pav and Bhaji washed down with a cup of tea. The diversity that one could see while travelling across India is definitely one of its kind – food, language, weather, topography and what not! I may not be an expert to comment on various issues but I could make a statement here on the breakfast that I had in three different states. From the Puttu-Kadla in kerala to the Buns in Karnataka to the Paav and Bhajji in Goa (which aren’t similar to the ones in Maharastra though), the diversity is certainly rich. After consultation with the locals, I chalked out my route away from the highway. From Mashim, I learnt that I can take a boat to Galgibag.

I was excited about another boat ride. This time, it was a small catamaran (word sourced from Tamil!!!) powered manually. The capacity of the boat was so less that I have to wait for one set of the passengers to go and then take the next ride.

The village on the other end was Galgibag. The beach is also a nestling site for Olive Ridley turtles. Riding further north, I reached the next destination was Polem beach. As I approached the beach, touts swarmed me with offers for rooms, cottages etc., A menace in most tourist sites in India and I was in no mood to entertain them.

En route to the next village, I stopped at a shop to enquire about an alternative route along the coast, if any was available. One of the locals suggested that it could be very difficult for me to because it is isolated as well as it has steep gradients making it difficult to cycle. However, a different perspective emerged when a foreigner came out of the shop and inspected my bike. Marc, as his name happened to be, told me that the best thing for me would be to take the alternative route. He advised me to fill my bottle with sufficient water and take the alternative route which leads all the way to Margao. Before that, He asked me to first come down to his resort in Agonda and offered to guide me from there.

I reached Agonda through a tree covered road and met him again at the “resort”. The resort was called Somethingelse @ Tito’s, a joint venture between him and a local who has rented the land to him. It had some artistically constructed huts and a small restaurant. He introduced me to his guests who looked impressed to learn about my bike ride! He also treated me with a mango juice and some fruits for my ride apart from filling my water bottle.

The route suggested by him was free from any heavy vehicles. It was frequented only by the motorbike taxis. An arduous climb, and I have to give my best to scale the heights. One of the climbs involved a continuous stretch of over 5 kms which drained me physically and mentally. The magnificent view of south Goa from the top of the hill compensated for all my efforts. It was a view that cannot be captured by cameras or words. I resolved to cycle this route sometime in the future, stronger and fitter. 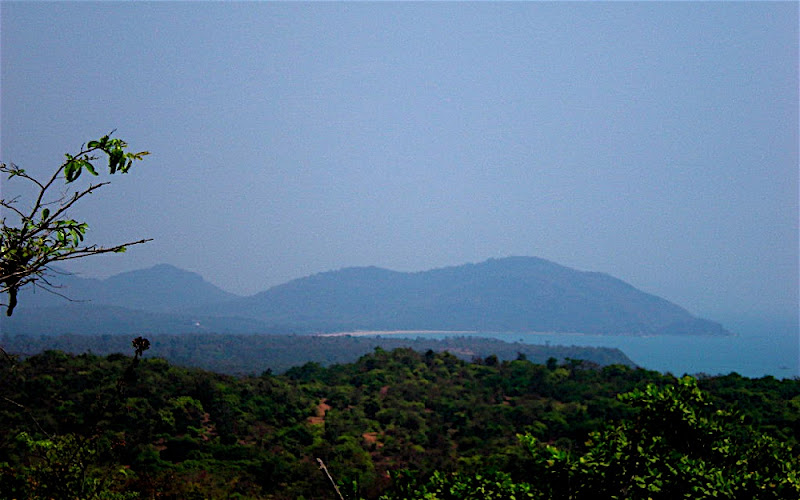 The road then slides down towards Kola where I had an option to deviate towards the fort at Cape De Rama. I have to opt against it requires some additional effort which proving to be at scarce then. The road eventually took me to Velim where an ancient church of St. Francis Xavier was present (pictured on the top of the page). This is different from the one on North Goa which houses his mortal remains. The ride throughout the afternoon was devoid of any proper meal and finally found a restaurant serving some Indian delicacies at a reasonable cost. I then proceeded north towards Assolna where a Jhankar was available to travel to Kavelesi. Another attraction of riding through the villages was the sight of the old Portuguese houses. The aesthetics and grandeur was simply superb.

After crossing Orlim, I reached Margao at around 6 PM and decided to plan my return journey from there. I proceeded to Margao Railway station to look out for trains from Margao to ‘any place’ from where I can reach Chennai. Luckily, I found that the weekly Vasco-Chennai express leaves the next day at 2 PM from Margao. I chose to do a small ride from Margao to Vasco on the last day and board the train from Vasco.

Don’t miss out some more beautiful pictures from Goa here