I surely know the hundred petals of a lotus will not remain closed for ever and the secret recess of its honey will be bared.

Running is a simple sport; But the choice of a good running shoe isn’t. A discussion on the choice of appropriate shoes can easily run into pages and a topic for many research works too. There has been plenty of debates on choosing appropriate running shoes, both on the run as well as off the run through various Internet discussion forums, blog posts, articles from running magazines, and others. The conclusion has invariably been not to conclude the discussion and allow each runner to find a solution for themselves. To add to the complexity of the discussion came in the form to bare or not to bare your feet. It also saw the arrival of a ‘new caste’ in the religion of running’ in form of “barefoot runners” – those who shun their shoes or opt for one of those minimalist shoes. A famous Indian model who once controversially posed only with shoes opted to run barefoot (thankfully with other parts of the body covered though.) Barefoot running sounded a bit exciting and I too got curious to experiment with the minimalist shoes. Also, the cost of these shoes weren’t any more than conventional running shoes. In June 2011, when my sister visited India, I ensured that she brings me one of those minimalist shoes (she has subsequently gifted me three more pairs of the same!). My initial attempts in running in those shoes were exciting as well as painful. While the short runs gave excitement, the longer ones were painful. I resorted to my old shoes for the Hyderabad Marathon in August 2011 and Colombo marathon in October 2011. In November 2011, Christopher McDougall, author of the book ‘Born to Run,’ wrote a brilliant piece for The New York Times entitled ‘The Once and Future Way to Run.’ Although I haven’t read the book, his TED talk is definitely worth listening to.

The article narrated the experiences of people running in the minimalist shoes. He also explains through wonderful illustrations on how to run barefeet and the importance of front-foot landing. It increased my confidence in taking up ‘barefoot running’ to longer distances. I trained with the minimalist shoes for a distance of half-marathon and couple of 30K runs during my preparation for the 2nd edition of Shahid Ultra scheduled to be held in December 2011. I could find some positives encouraging – it weighed lighter, the recovery was better and I could maintain a steady rhythm. However, the pain in the calf-muscle (which hardly exists in my case) was still unbearable. Also, I wasn’t sure if I can hold the pain for distances upto 50K.

The 2nd edition of Shahid Ultra was held on 11th December 2011 and this time around, Shahid ensured that the distance was definitely a 50K. The run did not turn out to be an encouraging one. The weather was bad and the humidity levels sapped out the energy. A horrific accident on the ECR involving motor-bikers with scenes of blood and flesh on the road added to the nausea. At the 5-hour mark, I preferred to finish my run. It was Shahid to appear from nowhere and encourage me to finish the 42.195K, which we completed in 5 hours 30 minutes. We then decided that we will hold on for another 30 minutes and with further encouragement from Shankar Lal (it was actually a misguidance), I managed to finish the run in 6 hours 40 minutes. 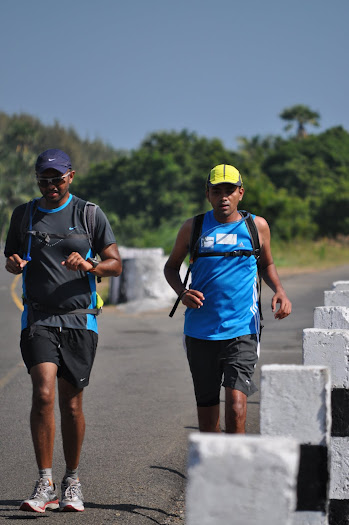 With minimalist shoes, the pain in the calf-muscles sets in early. It normally sustains over the distance and is usually bearable until a certain distance (which varies from runners). In case of conventional shoes, one always has an option to start landing on their heels. Minimalist shoes makes that difficult and the walk breaks are equally painful. Running beyond that threshold’ limit becomes challenging. On that day, 35K looked like the limit and every Kilometer beyond that was a huge challenge. In addition, poor sizing issues turned my toe nail black. At the end of the event, I had a chat with Ram, who also used the minimalist shoes for running the 50K. He agreed with me that it wasn’t comfortable beyond a certain distance. He kept his options open for the Comrades, even as late as ten days before the event. He eventually chose to run in the minimalist shoes and resolved not to run with them again.

I went back to my shoes to run the Mumbai Marathon in January 2012. The marathon was not run in my usual pace as I chose to accompany my friend Janardhanan is his attempt to complete the marathon. Truth to be said, it wasn’t sure who was accompanying whom! The run did not give me confidence to return back to shoes. The Shahid Ultra experience was soon banished and returned back to the minimalist shoes to run the YMCA Half-marathon on January 26, 2012. A nice weather and a great company for running, I managed to finish the half-marathon for an impressive timing of about 1:53:00 (purist GPS-enabled runners still dispute the distance though). 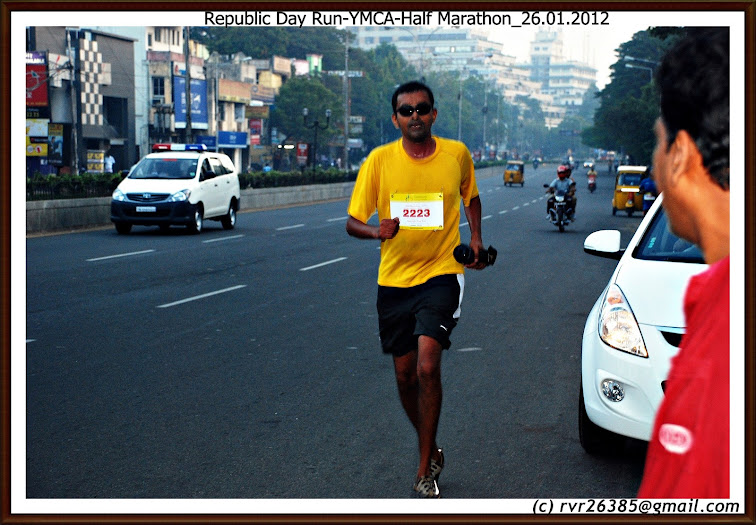 In February 2012, Ted McDonald or ‘Barefoot Ted’ as he calls himself visited India and enrolled himself to participate in the Auroville Marathon 2012. He was one of the runners featured by Christopher McDougall in his book ‘Born to Run.’ Barefoot Ted also promotes his line of minimalist footwear which are extremely popular. His talk on the eve of the marathon on barefoot running was very impressive. Speaking to him gave me some assurance that I am not likely to be doing anything significantly wrong by running in these minimalist shoes.

It was February already and changing back to shoes looked like yet another challenge. I ended up running my Comrades in the minimalist shoes and found some people giving strange looks at the start point. I found that only I and Ram were running the Comrades in minimalist shoes. In hindsight, it did prove to be a bad idea. While the uphill runs were enjoyable, It did not support us on the down-hill runs, where cushioned shoes would have provided the much wanted comfort. Nevertheless, I find running with minimalist shoes more enjoyable and continue to run with the same.

The debate is still on with some recent research showing that it causes damage to the bones. A recent article in NY Times focuses on the injuries caused by Barefoot running and Chris McDougall has devoted a separate section in his website for debate. The conclusion is rather obvious – each runner knows what is best for them!

2 thoughts on “Part 6 – The Barefoot Experiment”