It was past 3:00 PM and the sun was going down on the west increasing the anxiety. Comrades happens during the winter time in South Africa and the days are short. It was one of those rarest days where I find myself starting to run before the sunrise and finish (hopefully the entire distance) after the sunset. With 18K to go, the only consolation was that the distance was less than a half-marathon – Still, I have to run it before the time runs out. It was somewhere around this time that my stopwatch malfunctioned and I had to reset it. I could have lost a minute or two in the process, causing further anxiety as every minute matters from here. Meanwhile Vineetha had run past me and not to be seen again. Neepa was running two races – her own race and race to pull up Amit along with her. It has now become an all too familiar sight for me to see Neepa run ahead, stop and call Amit to join her.

The target was to finish 15K in the last 2 hours. After averaging 7k an hour for the previous 4 hours, I was not sure where I am going to find the time to run that extra 1 Km. Comrades marathon finishes strictly at 12 hours. Not a second allowance is given beyond the firing of final gun. I started preparing my list of excuses for not being able to finish, including losing 10 minutes to reach the start point; knowing well that such excuses counts for nothing, except a false sense of moral victory. The rules are clear and there is no point in complaining either. I resolved that next time some one sympathises for the Proteas about the ‘apparent injustice’ meted out to them in the 1992 Cricket world cup, I would respond back saying ‘rules are rules‘ and they too apply the same in Comrades. I was not finished as yet and there was some hope. The final cut-off point was at Mayville, located 7k to the finish line and the time limit was 11:20. The results page indicates that I finished in 11:03:29. Given that I was having my own clock, I assumed that I had 56 minutes left to cover the 7K, translating to 8 minutes per Km!

Another stumbling block for a Comrades runner is the presence of Cat’s Eye – the blinkers on the road. Many times, people trip over and fall down causing bruises and sometimes even forcing them out of the event. At one point, Neepa ran past me, stopped and turned around to run back. I saw Amit down on the road after being tripped by the Cat’s eye. Neepa went back, picked him and they joined to run again. After running almost 80K, it was next to impossible for me to go back even a couple of metres, let alone pick up someone and run again. Shoul I ever trip, there was no way that I would get up and run again. It was becoming a familiar sight to see exhausted runners on the sidelines; and a few finishers sporting their medals, who had come to cheer us. There were ample support from the crowd in terms of cheering and also, letting us know how much time was left.

With 5K to go, ther was 40 minutes left as per my stopwatch. I could sense that the crowd around me was thinning down, leaving me with doubts about the time in my stopwatch. The fear set in and the it looked like a make or break moment. This could be the one last time when I have a clear chance of finishing the event. I have run 84 Km, and here, I am left to either win it all or nothing. The next 2 Km possibly defined my Comrades marathon. I dig deeper, prayed to all the Gods whom I knew, and gave one final push. I recollected these famous lines from the movie ‘Chariots of Fire’

Then where does the power come from, to see the race to its end? From within..

After running 84 Kms, it was unbelievable that I got the strength to run those 2 Kms under 14 minutes, possibly the fastest in the entire run. Left with 3K to go, I was back in the crowd of runners, and with possibly another 26 minutes to the cut-off time, I wanted to relax a bit. The crowd had other plans though. Every time, I choose to walk, someone on the crowd would yell at me, ‘Run.’ One of the race marshalls adviced me that I would develop cramps if I slow down now. The noise was gradually on the rise and I could sense that I am nearing the Kingsmead Stadium.

With a Kilometre to go and possibly 9 minutes available, I thought I can walk the distance. Since I could not spot the stadium clearly, doubts about my calculations crept it. Just before entering the stadium, I could hear someone announce that 5 minutes are left. The entry into the stadium was surreal, to say the least. With Joey Tempest’s Final Countdown played on the loud speakers and the audience screaming at the top of their voices, I was running through a narrow track and I was fully charged up. And for the first time in the race, the terrain was flat!

The lap inside the stadium with the music and cheering was a moment to be savoured. But, it is not worth it unless I finish the run and the finish arch is yet to be visible. At the first sight of the finish arch, a sense of relief finally prevailed, and I was lucky to have the priceless moment captured in this beautiful image.

Joining the crowd of finishers 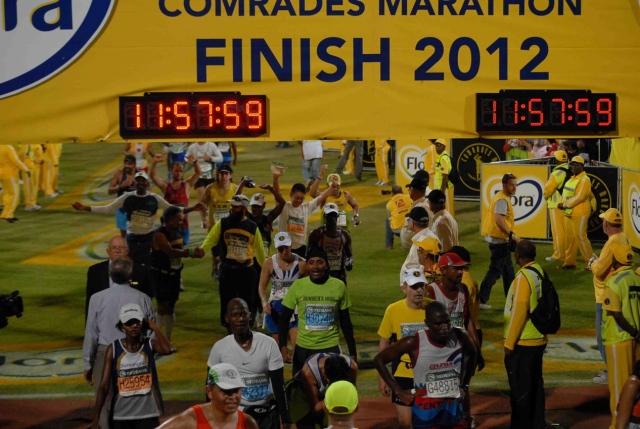 Walking past the race director (in Black Suit). The Race Director, Peter Proctor does the (dis)honours of firing the gun at the 12-hour mark. He does that with his back facing the finish mile, so that he doesn’t see the disappointed faces of those missing the cut-off time. I was lucky that day to sneak in before he does his job.

You can watch couple of my finish videos here

And you could watch Amit and Neepa finishing here