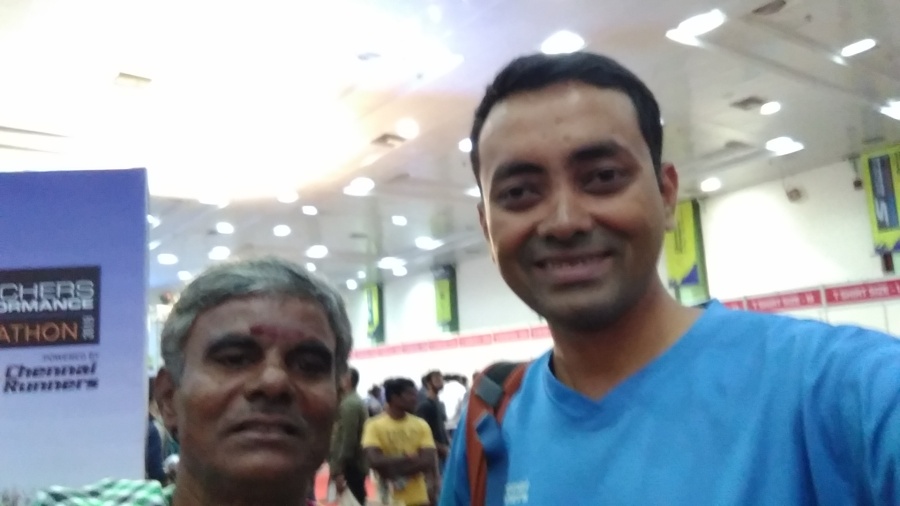 Running has introduced me to myriads of people, to whom I would remain forever indebted for the treasures of wisdom that they parted with me, in thought, word and deed. One such person was Raja Marthandan, who at the first sight wasn’t someone I would have looked up to.

In 2010, I was volunteering for the Auroville Marathon 2011 when he appeared in our office. He had come all the way from Chennai and his dreary look certainly didn’t give an impression of someone remotely interested in the event. I nonchalantly handed over a Tamil application form, the only reason being that the form was on my desk unused. He did not possess any mail id or even a phone number, and his other queries made me sceptical about the seriousness of him participating in the event. I was hesitant to take the money for I was not sure if he would really turn up. I further tried to dissuade him by letting him know that the event doesn’t carry any prize money and we communicate only through e-mails.

On the day before event, he appeared late in the evening which only increased by scepticism. I handed his running bib and wished him good luck. He asked me if I can help him with a place to stay that night. Auroville does not have enough ‘affordable’ places for stay and during that year, we stopped arranging for dormitories. Since, I was running the following day, I tried to escape from the scene, and looked up to Anand (as I used to do in times of difficulty!) to handle him. Anand, as ingenious as ever, suggested that he can sleep at the bib distribution centre and take care of our belongings. Despite the ‘poor stay arrangements’, he went on to surprise us the following day by finishing the marathon in 4:20 and thanked us profusely for the help! (For records, I finished the marathon in 4:58).

A year later, he appeared again to register for the 2012 edition of the event. Needless to say, we were equally excited by his decision to participate. The entry fee for the event has been raised from Rs. 300 to Rs. 400 and he didn’t relent either. As he finished the process, I too stepped out of the office along with him to complete another errand. He asked me shyly if I can lend him Rs. 50. He had come from Chennai carrying the exact amount required for the trip and registration. Since the entry fee has gone up by Rs. 100, he fell short of the return fare. I took out the entire entry fee of Rs. 400 and handed over to him saying that he can participate as our guest. He refused the entire amount and took only Rs. 100. The following week, he returned back to pay the Rs. 100.

It stuck me deep inside that it is the money of people like him that we are spending to organise the event and made me feel more responsible towards it. It also made me to retain the entry fee at Rs. 400 as long as I was associated with the event.

In 2013, he appeared at the Chennai marathon expo. He did not register for the event as registrations for the event was only through website. I saw from far that he was hassling with Shahid, the race director, for an entry to the event. I met Shahid seperately, took the liberty to ask for an entry for him and pulled out my wallet to pay for it. On learning his case, he was kind to offer it for free. When I walked up to him and handed over the bib, he was elated but refused to accept it for free. He insisted that he pays for the event (which was quite pricey!) and thrusted the notes in my hand. Doing charitable acts cannot be always taken for granted!

I have not met him since and his appearance in Chennai marathon earlier this month made me feel so happy. Unfortunately for him, he registered for the full marathon and took the wrong turn to be disqualified!