After running for 6 hours and completing 46 Km, the first board I see was “43 Km More.” The Kilometer marker boards in most marathons will show you the distance completed. Comrades is a bit cruel in this regard. They show you the distance that is yet to be covered. It makes you feel that all the distance that you completed so far is absolutely worth nothing. I have run 46K, yes 46K, more than a marathon distance and here I was looking at the board which says that I have to run a marathon distance. From that point, I took the approach of a chasing team in a one day cricket match. I need to cover a distance of 43K in 6 hours – I hour of running at 8 Kmph and 5 hours at 7 Kmph. Running at 7 Kmph was translated into 1 minute walk followed by 1 minute run approach. Sadly, that one hour in which I can run 8K never happened.

There were times when I ran 4K in 30 minutes only to slow down in the next 30 minutes due to a steep uphill or downhill or due to lack of energy. In ultra marathons, most of the energy to run the distance is sourced on the run. It largely depends on the food intake in the early stages of running. As you run, one frequently experiences sudden bouts of increase as well as decrease in energy levels. The key to completing the distance is all about holding your head during these phases. At the end of 7th hour, I had completed 53K and has now crossed the Botha hill. 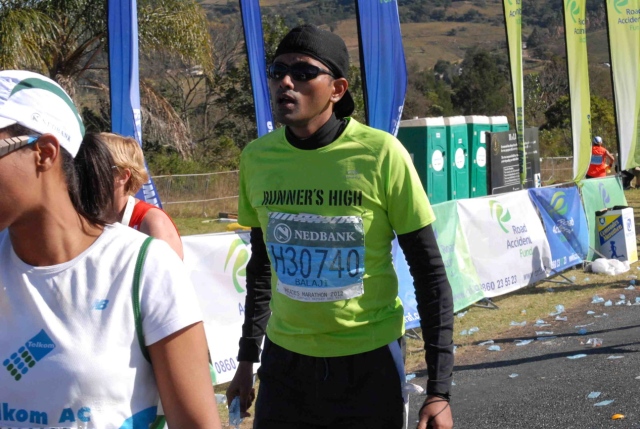 It was here that I heard someone cheering for me ‘go Balaji go.’ It was Ram in the pick-up car indicating that he has dropped out from the run. My heart sank low on seeing him. A sense of guilt engulfed me as I felt that I made a mistake in leaving him back. Then, this was one of those runs where I was not even in control of myself and there was little that I could have helped him. Picked up some courage to tell him that I will finish for him even if I wasn’t sure of that outcome

I still could not find that elusive 1 hour in which I can finish 8K. With 4 hours left, I had to finish a distance of 29K. The Indian contingent running along with me were Amit, Neepa and Vineetha. Going by timings, it looked like we ran the race together. But, each one had a battle of their own and were fighting towards the finish. We were overtaking each other and each time we pass by the other runner, some words of encouragement were shared. I checked with Amit if there are any cut-off point that I should worry about in the remaining distance. Amit advised me to just be with the crowd and I can see through to the finish.

The run from the half-way point to the Cowies Hill goes through some scenic country-side locations. On of them was through a village called Kloof where the sponsors had created a ‘sponsored mile’ giving an unique feel to the event. Most sponsors usually concentrate on the start/finish area of marathons ignoring the route in between. The next cut-off point was the Cowies Hill (Distance completed – 70.97k; Distance to go – 18.2K. I think the cut-off time for this point was 10 hours from the start. I managed to cross this point at 09:30:39 which leaves me with a distance of 18K in the next 2.5 hours.